he Cross was a side project of Roger Taylor that existed from 1987 to 1993 and released three albums.[1] Although the drummer in Queen, Taylor fronted The Cross as rhythm guitarist and lead vocalist. On its debut release, the classic rock band incorporated dance influences which they dropped on their remaining two albums. The band never enjoyed much commercial success, but continues to retain some interest among avid fans of Queen. 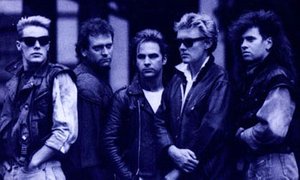 Cowboys And Indians
Love Lies Bleeding (She Was A Wicked, Wily Waitress)
Virgin 109447-100